Laval Virtual World through the eyes of two VR/AR influencers 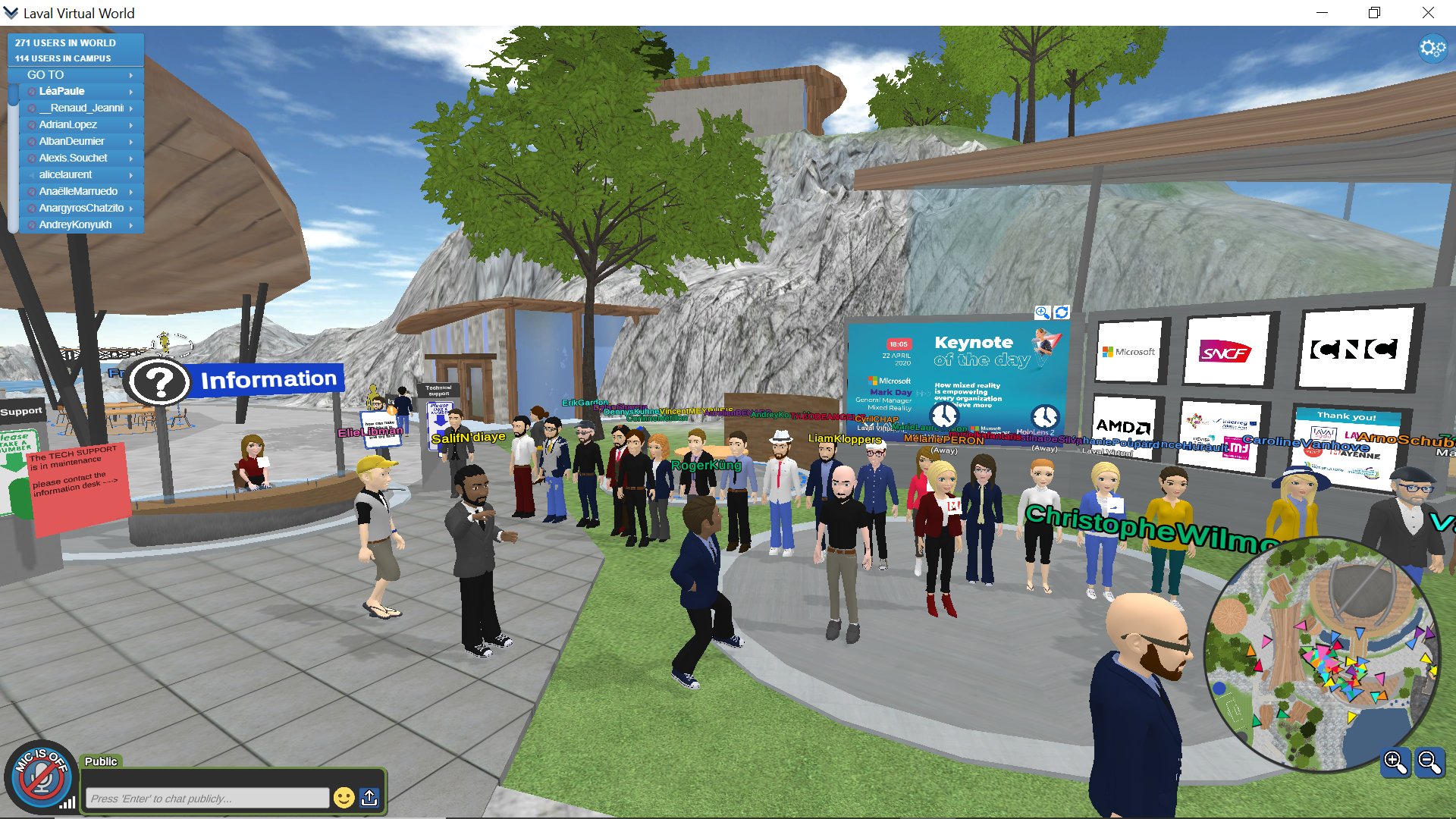 At the end of April, the Laval Virtual World took place in a virtual world built with the platform VirBELA. 11,200 people registered for this unique adventure. So many people who enjoyed the many possibilities offered by this 100% virtual world. The welcome given by the community and users was more than comforting for the entire organizing team. The feedback on this world premiere is above all advice taken and stored up for the future. Especially those given by the VR/AR community itself, and two major influencers: Andy Fidel and Kent Bye.

On the one hand, Andy Fidel has been working in the VR/AR field for several years now. As a social media specialist with 10 years of experience in digital marketing, she is very interested in the social aspect of immersive techniques. As a freelance she works with other entrepreneurs and start-ups to create 2D and 3D experiences for remote communities. Andy Fidel’s research interests include the impact of immersive reality and virtual incarnation on digital communications. The Laval Virtual World promises to be a real playground for her!

On the other hand, Kent Bye likes to call himself a “philosopher and oral historian of immersive technologies”. In 2014, he created “Voices of VR”, a podcast in which he interviews actors of the VR/AR sector: academics, visionaries, creators, developers, technologists. Since its foundation, he has conducted 1,200 interviews by travelling to the biggest international events on immersive technologies. With his podcasts, Kent Bye aims to explore the potential of VR/AR for the future. The Laval Virtual World was a chance to measure the potential of virtual worlds for event and business purposes. As an VR specialist and a skilled tester of applications and platforms, he is demanding and sharp when it comes to the Laval Virtual World. But his expertise is a good way to evaluate this project built in only one month.

1/ THREAD@lavalvirtual conference has started in virtual reality. Thousands of users in VR using the @VirBELA1 platform. They’ve had an overwhelming response & most of the rooms are too small & it’s difficult to see the slides. Buzzing! #LavalVirtualWorldhttps://t.co/Ttn8VJUyzI pic.twitter.com/yyHTtwWTNt

The two international VR/AR influencers made a series of tweets during the Laval Virtual World event. A hundred short messages in all in which they gave their first impression of this virtual world. They also did not hesitate to give valuable optimization and improvement tips for future virtual events. Here is a summary of their comments.

A wide virtual world for everyone

While discovering Laval Virtual World, Andy Fidel and Kent Bye, as well as all the users, noticed the wide world that was offered to them. The two VR/AR influencers explored the virtual world to discover the many spaces built for the event.

Many areas to match the rich programme

What struck Andy Fidel when she arrived in the virtual world on the first day of Laval Virtual World was the conference area. She was immediately enthusiastic in a tweet: “The whole conference world is ginormous.“. The conferences were indeed at the heart of this unprecedented event. The virtual world of VirBELA did not allow, in the time given, to create a copy of the physical exhibition, especially the exhibitors’ booths. Yet, the exhibition represents the essential part of the physical exhibition of Laval Virtual.

The Laval Virtual World was an opportunity to put conferences at the centre of the event. The remote mode made it easy to invite speakers who would not normally come with the thousands of kilometers to travel. And the conferences were a great success, bringing together several hundred people in one room at the same time, as Kent Bye points out about the conferences on Recto VRso, the art and virtual reality festival: “200+ attendees in session is a lot bigger than normal!” Andy Fidel, for her part, congratulates the content of the conferences and the technical support behind the smooth running of the event: “I was online with up to 841 people. Excellent content.“

Apart from the conference rooms, there were other areas to be discovered. The two influencers also embarked on explorations: “Took time off to wander round the world. Ran all over the place. Found a bunch of hidden trails and cool nature spots”. During her exploration, Andy Fidel also took the time to read the hundreds of post-its that users had written all over the world. In the world of VirBELA, users could leave messages on post-its and hang them wherever they wanted. This allowed Andy Fidel to discover new groups and communities around VR/AR. For his part, Kent Bye says he was able to meet people just outside the conference rooms, in the campus area: “Had a couple of collisions outside of the main conference hall. It’s a good area to hang out and run into people you know or don’t know.”

The challenge of creating reality in a virtual world

Creating a virtual event is like creating a real event, the only difference is that the space is unlimited. That’s why Laval Virtual World was full of areas where small events were co-organized, where sponsors could present their products. The “Microsoft Area” was a set of meeting and conference rooms where Microsoft partners were highlighted through a rich conference program. It was a real challenge to create such a wide world with such a large offer!

Rooms were specially built and quickly invested by the sponsors of the event. The decorations could be personalised ad infinitum and the sponsors put their colours on the walls. But a fully virtual world brings new issues and challenges. In particular the occupation of the space and its animation. Kent Bye explains that he would like “to see virtual event sponsors be more innovative with experiential marketing.” According to him, sponsor rooms have the potential to become socialization hotspots that generate relevant interactions.

The same applies to other areas created in the Laval Virtual World. For example, the press room, designed to welcome journalists during the event. A space like this must be well designed to be compatible with a 100% virtual world. However, it is difficult to do one-to-one interviews in this room, because everyone can talk at the same time. We can hear our neighbour’s conversation, even if his avatar is at the other side of the room.

Communication problems were also present during the more festive moments in the evening. During the Laval Virtual World, several Laval Virtual parties were organized for all users to get together, in order to re-enchant the social bond somewhat weakened during the confinement. All the users met on the soccer field, around a DJ, also in the form of an avatar. This gathering was also a good place for encounters, and Kent Bye met people he knew from the VR/AR sector, among others. However, he recommends increasing the number of private conversation areas (marked with blue circles) to allow for more quiet interaction.

A time to meet during a period of social distancing

In addition to the conference program offered during these 3 days, Laval Virtual World was also an opportunity to get together. A large part of the event was professional meetings as well as virtual reunions.

A virtual reunion that was appreciated

The social part was an important point, even if we were attending a BtoB event. Andy Fidel is pleased that “Such a delight to see VirBELA put real attention (and intention!) on social engagement in all across and between the conference halls in this world.” The enthusiasm to find a colleague who is almost flesh and blood was felt by the users. Many moments were organised during the event to continue these exchanges and meetings. The evenings and challenges were appreciated social breaks. “Well done on the social spaces! We had a great number of choices. Loved the beach, the soccer field, and the mountain paths”.

To encourage meetings and discussions, VirBELA has created private chat areas. In the Laval Virtual World, they are materialized by luminescent blue circles. Two (or more) users need only to enter these circles to escape the ambient noise of the virtual world to be able to talk in peace. These spaces are highly appreciated and praised by Andy Fidel and other users who make good use of them.

And although hearing everyone talking at the same time can be embarrassing, it can lead to encounters! Kent Bye experienced this at the Recto VRso festival area. He reports that while he was on the roof of the Recto VRso Hall conversing with someone, another user three floors down heard them. The three people then joined together afterwards to chat!

A world created for business and networking

The areas for discussion and meetings were also an opportunity to engage in professional exchanges. One of the regrets we can have about this virtual edition is the disappearance of the exhibitors’ booths. It is difficult to set up such a system when we are in the early stages of organising 100% virtual events. Even if the perspective of virtual booths is taking shape in the future. In the meantime, fallback solutions had to be found. And the users showed ingenuity!

While exploring the world, Kent Bye spotted users using the private chat areas. In particular, he noticed representatives of ProTubeVR who had imagined a booth “on the fly”. They had set up in a blue circle, and posted a post-it note with the company name and mission statement. The post-it is more engaging and the user doesn’t feel as if they are disturbing a private conversation.

These discussion points played an important role in the networking part of the event. Although Kent Bye regrets that he didn’t meet as many new people as he did at a virtual event. Andy Fidel explains that as she travelled around the world, she met other users. The blue areas have made it easier to make connections and have conversations.

In the end, feedback such as that expressed by these two VR/AR influencers, Andy Fidel and Kent Bye, helped identify the strengths and weaknesses of this Laval Virtual World. Valuable advice to take into account at the dawn of the multiplication of virtual events. The practice is still very young, and the event industry is making slow progress towards virtualization. While the conference and professional meetings part is easily virtualized, the exhibition space represents a new challenge.

At present, there is no online platform that allows you to create a virtual booth. It is possible, but you have to start from scratch. It takes time and money, almost as much as in real life. The virtual events are not mature yet, but many perspectives are appearing on the horizon. Laval Virtual is always ready to propose innovative events to highlight these technological advances.