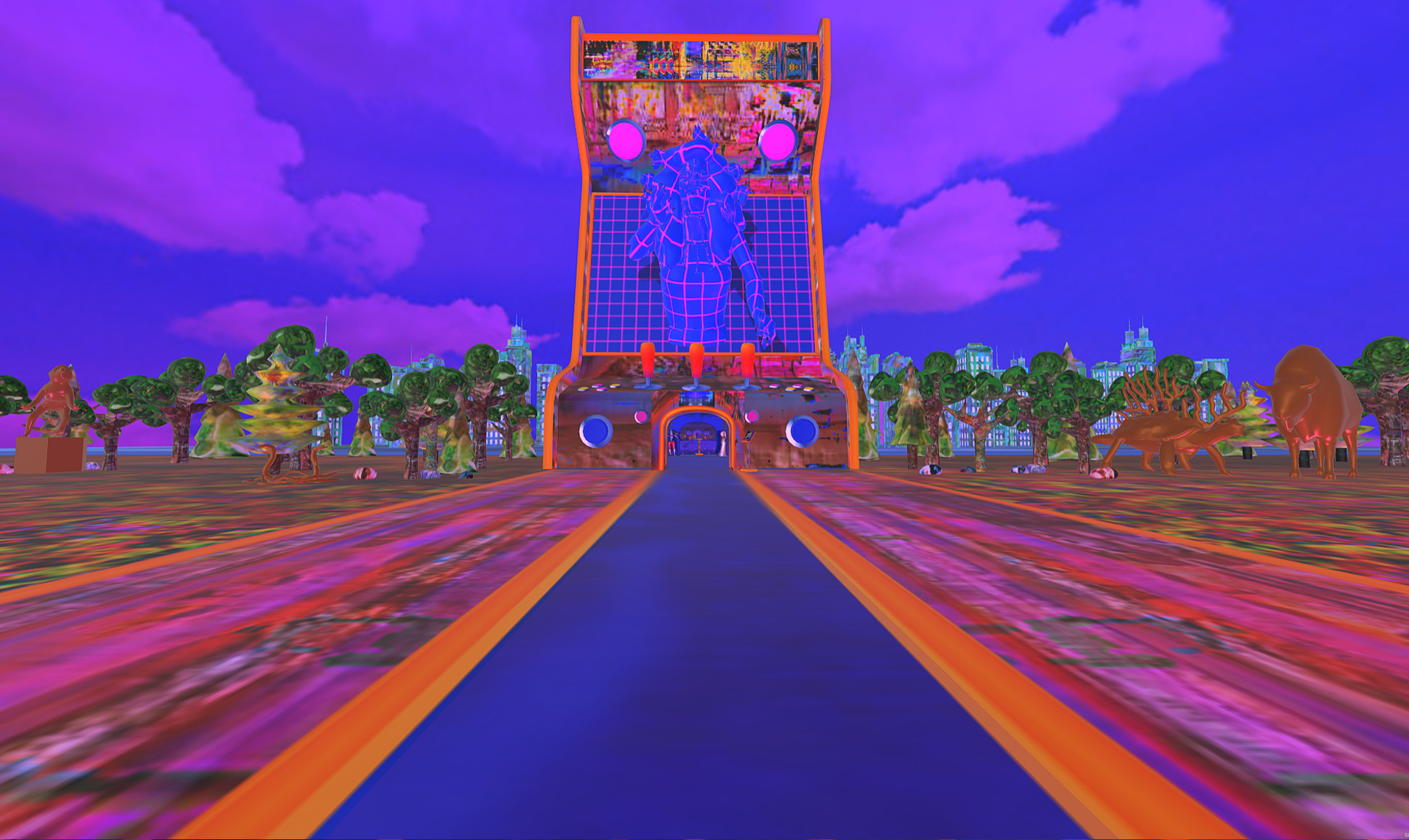 The wwwunderkammer questions many topics including the environment, feminism and colonization.

In her work, the artist Carla Gannis is questioning the overload of information that we receive every day on the internet and in the media. As part of Recto VRso 2021, she presented wwwunderkammer, a contemporary version of the Cabinets of Curiosity from the 16th century. We interviewed her to know more about her vision of digital art and all the current topics that she addresses in her work.

Can you introduce yourself? What is your artistic background?

I have two degrees in painting. Both programs were really traditional, in the sense that it was about applying oil paint to a canvas. Some painting programs are more open-minded, but mine was really traditional. I passed these degrees in the 90s. Then I moved to New York City right after I graduated from school. There, I was introduced to artists working with computers and immersive technologies. I realized that I was very interested in that trajectory and decided to expand my artistic practice and start working with digital technologies.

You studied in the 90s, which was the beginning of digital art practices such as Net Art.

Exactly. Actually, my father worked in computing and he showed me some applications. But I was resistant, studying my painting. And my dad kept saying that the future of art was going to be made with computers. But I had this tendency back then to do the opposite of what my parents said [laughs]. I do think that early exposure influenced me when I finally began to transform my own practice. In the mid-90s, I actually came to New York because of computing. I taught myself how to build a database for a job, so I could support myself in the city. It was a really exciting time. But I remember thinking I was late, compared to all the people that were doing amazing stuff already. I made a distinctive and important decision to actually throw all my paintings away.

What is it about virtual reality that seduced you the most back then?

I tend to be a nostalgic person. A lot of my influences are not only art but also from science fiction and speculative fiction. They take many forms and genres, including television and books. There is this great book by Janet Murray called Hamlet on the Holodeck from 1997, that I referenced many times in the digital arts classes I’ve taught over the years. In 1997, she predicted and described the emerging ways we would be making art, and how it would take more hybrid and virtual forms. She released a second edition of the book in 2017 and she mentioned in the preface: “I was right”. And she was! Even back then, I used to think of flash websites or Second Life as virtual reality. But it’s amazing today to see all the applications that we have and that are so accessible. In the 90s, virtual reality wasn’t able to appeal to a mass audience because the headsets were very large and expensive. As an artist, it’s important to work with a medium and a technology that is accessible today, and a way for people to experience our artwork. Now, that’s more possible than ever before!

Can you present your artwork in a few words?

The wwwunderkammer project is an ode to the internet and to Net Art, as much as it is to history. It began because I was really fascinated with the way we archive today, how we create collections online, especially in 2D spaces such as Instagram and Pinterest. As a species, we do have a predilection to collect things and to place value on objects and things that represent our identity. In the historic and a contemporary sense, the wwwunderkammer is a much more personal expression of what we find valuable and meaningful. I wanted to bring that to a virtual environment. The wwwunderkammer has also a colonialist aspect. In the 21st century, there are many concerns about these histories. I wanted to be critical and examine that in the selection of objects that I chose and in the topics: decolonization, endangered species as a result of climate change, emerging technologies – and there are quite a few more…

In your work, you talk about colonization and the environment. In the description, you mentioned feminism. Is it an important topic for you?

Yes, feminism is a very important theme that runs throughout all of my works. In the wwunderkammer, there are particular points that address feminism more than others. There is one cabinet that is specifically dedicated to female identified comedians from around the world and across time. For every continent, I wanted to make sure I found women who express themselves through humor. The reason I chose that particular topic in this angle is because there has been this tradition of denigrating women. In people’s minds, women can’t be funny. But there is a huge number of women that have proved that they are incredibly funny! It’s a place where they can address a host of issues in terms of finding their empowerment and their voice. And we are living a tragic time, so humour feels like some kind of relief.

You studied painting at the beginning of your career. Are you influenced by a particular artistic movement?

The main chamber of the wwwunderkammer is inspired by etchings and drawings I found in my research. It’s a room with different objects and artefacts – it’s a reference to the  “Cabinets of Curiosity”, which is the English translation. I thought about ways that I could revivify the notion of wwwunderkammer, and also criticize it. There are other references, like the wallpaper which is a reference to Hamlet on the Holodeck, the floor which comes from a 1992 movie about VR called The Lawnmower Man. One more important point is that I worked with AI, artificial intelligence, for over a year. For every one of the topics that I address in the wwwunderkammer project, I trained an AI with image data sets. All the cabinets are lined with images generated by the AI. So, when you come into the main chamber for the first time, it might seem conventional in the architectural sense, but then it’s infused with layers and layers of contexts. The data sets we seed AI’s with are very critical and important to our time.

When we experienced your artwork, we found ourselves in a very colorful environment. There is a strong contrast between all the colours, visual effects too. In VR, it can be a bit disturbing for our eyes. Was it intentional?

The work that is included as part of Recto VRso is a translation of a desktop VR experience; a single-user experience. When I was building it, there were a lot more interactions. You could pick 900 objects up and throw them around, reposition them in other cabinets. But when I started translating it to the web, VR platforms like Mozilla Hubs couldn’t support that many interactions. So I ended up making animated gifs.

But admittedly, it already had saturated colours in the original version [laughs]. It’s a tendency in my work to express serious topics in a pop art universe. But it wasn’t intentional to make people feel uncomfortable. I teach VR and I try not to create experiences that could make people sick. But the very nature of having all of that information at once is intentional. For the user, it can be overwhelming, because everything is moving all at once and it’s difficult to pay attention to one thing. I am trying to represent how we experience life today and how we can find ourselves overloaded. We process so much information every day! As a culture, we experience an information overload.

In one room, there are specific symbols related to the Internet: # and @. Why did you represent them?

They are in a cabinet dedicated to network communication. These symbols have become so linked to the way we communicate with each other and how we express our identity. The @ has become part of our name and of our name recognition. The # is a way for us to promote ourselves and to feed our thoughts and philosophy into the media stream. I feel like those have become very iconic symbols.

What’s the future for your the wwwunderkammer project?

The WebVR experience continues to grow. We launched three new chambers recently. It’s exciting to work on an art project like this, that has an unlimited life. Just like the Internet, the project continues to grow. Right now, I’m trying to bring more people in, create a bigger community, and get other people’s perception on what is important to collect and preserve.

What I notice in all the interviews I conducted is that digital artists often say that they talk a lot about our society and current context in their work. Do you agree?

Just like any collection of artists, there are always some artists who have a more political practice. I do think that digital art comes out of a tradition of conceptual art. Many digital artists are very engaged with expanding their work outside of the “beautiful”, by adding subtext. It’s a really big community, and what is exciting for me is that more and more digital artists are starting to be identified simply as artists. Today, we live in a digital age, and at this point we can just say that we are making art.

Did the pandemic change the way you work as an artist? In the messages that you address or your creation process?

It certainly did. Last year, in the summer, I felt an enormous feeling of sadness myself, and in my students. I’m a professor at NYU. I was really moved by what my students were dealing with, and also about the murder of George Floyd. That really affected me, all of us, and it also affected my practice and choices I was making about where I wanted to show my work or what kind of work I wanted to make. I’m a person who has the tendency to work a lot, but I had to pause. I had to look at myself and at our culture.

As a consequence, I co-curated a show with Clark Buckner, founder and director of Telematic Gallery, which was an extension of the wwwunderkammer. It was a place where we could provide a platform for other artists and other voices. We asked 57 artists to participate in the show called “The Archive to Come”. It was a social VR show, a website and a physical event in a gallery. We asked each artist, in response to all the things that were going on in the world at that time, what was meaningful to them, what kind of archives did they want to preserve and speak out about in their own art. It was a really amazing show! It was a way to provide a platform where we, artists, could stay in touch and communicate, and be compassionate with each other. It was my first big response to the pandemic last fall. During these difficult times, building a community and finding ways to mutually support each other is really essential.