“A new era for virtual worlds and events” 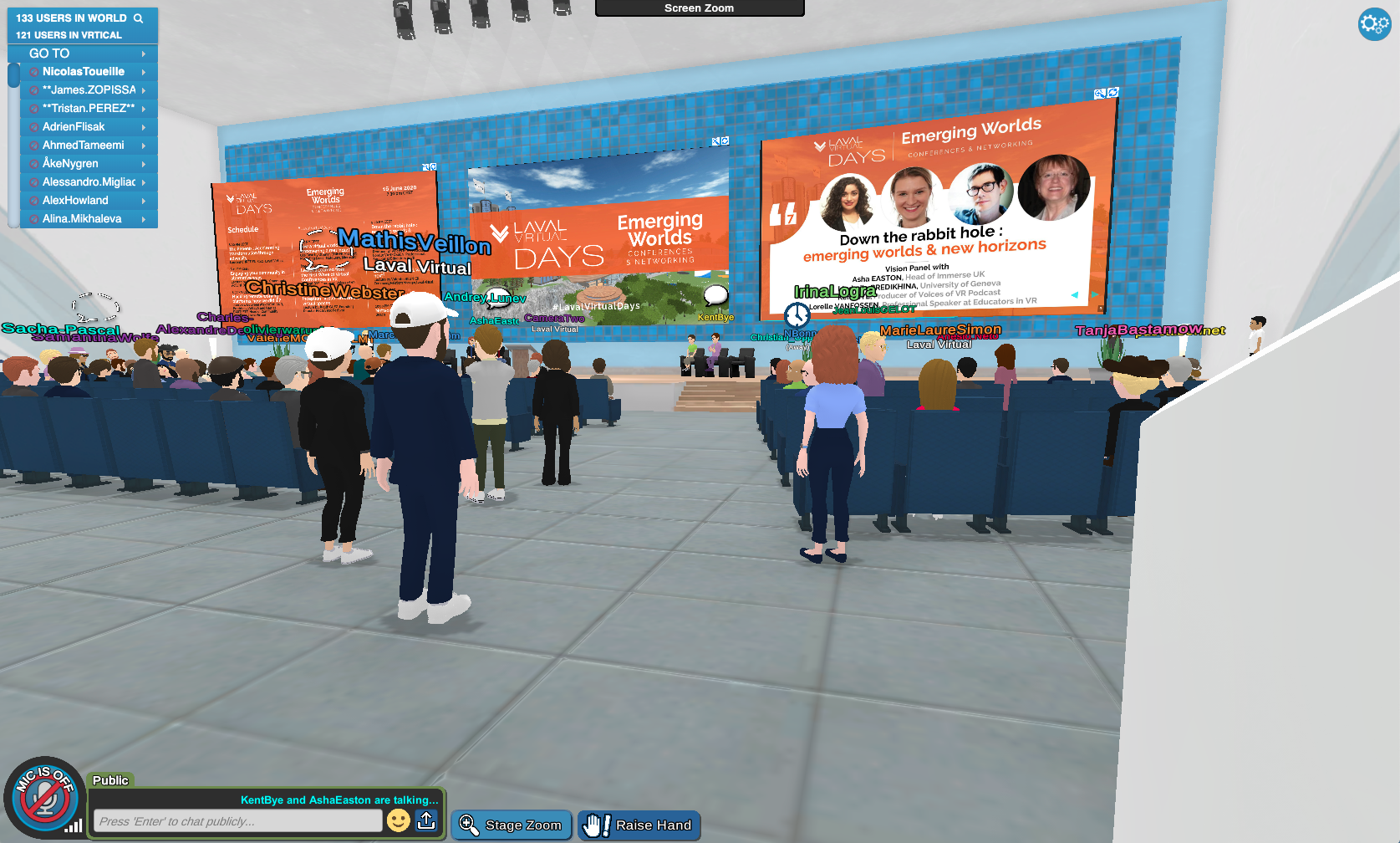 Last night, about a hundred people, VR/AR experts or not, simple curious or fervent specialists, gathered in the Laval Virtual World. Almost two months after the virtual version of the annual exhibition, these all-digital Laval Virtual Days were an opportunity to look back on the virtual adventure of the past few weeks.

Virtual worlds: the rebirth of the phoenix

Last night was no longer the excitement of discovering the virtual world, but rather the taste of reunion. Laval Virtual World has become a familiar environment for many people. Since the virtual event was held last April, many people have embraced this digital space to continue exchanging, sharing and meeting. Two months later, the virtual world built in VirBELA takes all its meaning through punctual meetings like these Laval Virtual Days. So many events that are full of enrichment and insights to continue exploiting these new virtual worlds.

Laurent Chrétien, CEO of Laval Virtual, made it clear in his introductory speech: “Welcome home!” This was the mission that Laval Virtual and its entire team had set for itself: the longevity and ownership of the Laval Virtual World. A few weeks ago, it resulted in the creation of the Mayenne World by the French department. The development initiated by the Laval Virtual World continues, and the emergence of virtual worlds is now certain.

In his introduction, Laurent Chrétien spoke about the rebirth of a phoenix through the emergence of virtual worlds. The health crisis has led to finding alternative solutions to work, to meet, to organize events. Finally, when we thought we were back to normal after these months of transformation, we realize that all the solutions imagined and deployed have a role to play in the future. Some of them are even seen as a way to preserve the planet and its rich nature. How to continue using virtual worlds? How to avoid the exhaustion of solutions that may seem too avant-garde and innovative? How can we appropriate new technologies, including immersive techniques, to offer alternatives that are respectful but above all accessible to all?

A (virtual) world of possibilities

The success of virtual events

A few months ago, it was inconceivable to hold conferences and meetings in a completely virtual world, with participants reincarnated as avatars. Well, we weren’t thinking about it! Systematically, a meeting, a seminar, an event (especially an international one), was done face-to-face. However, alternative solutions quickly emerged. The world of virtual and augmented reality has now appropriated them and is seeing the benefits. Othman Chiheb, Product Marketing Manager for HoloLens Microsoft, spoke about the Microsoft Area from the Laval Virtual World.

The Microsoft Area was a reserved space during the Laval Virtual World. A space that was built and set up in just 5 days, after Microsoft made the decision to support the virtual event: “Microsoft used to be a historical partner to Laval Virtual’s physical event.” Microsoft teams did not hesitate more than five seconds before expressing their support for Laval Virtual World, sensing the importance of encouraging this kind of initiative.

The enthusiasm was also strong among Microsoft partners and speakers chosen for the three virtual days: “Our partners really wanted to be part of this world premiere.” So much that more than 80 speakers contributed to conference programme built in only 24 hours which was a great success. Between 70 and 100 people attended, which is much more than during the physical events. “3,200 avatars entered the Microsoft Area on the first day“, reports Othman Chiheb, and “460 during the keynote of Mark Day.“

Maintaining links within the XR community

Othman Chiheb already sees the benefits of a virtual event, first of all the cost which is much less than a physical event. He also explains that the Laval Virtual World has helped strengthen relationships with Microsoft customers. The same goes for Andrey Lunev, Community Activist for XR Crowd. In his lecture, he explained how the XR community stayed connected during the lockdown. The virtual worlds were a great help.

Andrey Lunev began by explaining, “In March 2020, I was looking forward to more events, when suddenly all of those events started canceling.” So we had to find another way to bring the XR community together. And what better choice than virtual reality, the heart of its universe, to do that? #ZeroEvent was then created: “it’s a weekly gathering of the community.” The goal was to continue the exchange, but the opportunity was also to test virtual reality platforms: “We all wanted to explore the social interactions and the only way to do that was to get together in VR and test the platforms.” Many platforms have been tested: Engage, VirBELA, VR Chat, AltspaceVR, Rumii, Glue Collaboration.

It is these virtual gatherings and tests that led to the choice of VirBELA to organize the Laval Virtual World. But they have also helped to grow the relationship between all members, especially between Laval Virtual and XR Crowd. The virtual worlds and events have not only maintained the existing link within the XR community, but have also created new content and studies.

How to build, improve and make a success of these virtual worlds?

An example of online platform: the story of VirBELA

Once the discovery period of virtual worlds and their infinite possibilities was over, it was important to ask the question: how can we improve these already existing virtual worlds so that they meet the current demand? How do I know which features I prefer? This is the question currently being asked by Alex Howland, founder of VirBELA. He created the platform in 2012 while he was in graduate school. He took part in a competition to find the best way to improve graduate education. This is where he pitched the idea of using virtual worlds to bring people together from all over the world, to learn with a playful tool and to encourage interaction in a globalized economy.

Today, VirBELA has grown, especially in the last three months where it has expanded from 20 to 75 employees to meet the increasing demand. Because many sectors are interested in VirBELA. The platform has welcomed religion groups, support groups, consulting firms, etc. Holding the Laval Virtual World demonstrated its ability to organize events of international importance. This also allowed to test the functionalities and to consider improvements to develop the offer and the possibilities.

Many ideas run through Alex Howland’s mind. He sees a lot of opportunity in the event space, the remote work space, the education space. Regarding VirBELA, the goal is above all to “keep accessibility a priority“, he promises to make efforts to improve the virtual reality experience. For example, it is difficult to manage presentations and screens in an VR. Today, more people are working within VirBELA to improve this experience. It is also planned to integrate webcam sharing, so that you can see the people you are meeting with in small groups. Possible improvements that have been identified by Kent Bye, who has tested many VR platforms.

A multitude of virtual reality platforms to discover

Since 2014, Kent Bye has attended almost 100 conferences and gatherings. When they started going virtual, he had to go there as well. He was then able to compare the virtual with the real. He then asserts with certainty that an online platform such as “Zoom can pretty much handle conferences and talks.” His question is mainly: what else does the VR offer? And what can be improved to make this virtual experience close to reality?

A virtual reality world allows the user to navigate through a space, as opposed to a simple online conference. He will then be able to meet people, talk to them, have small group discussions, in short, make connections. But we can’t really talk like we would in real life. Kent Bye takes the example of VirBELA and regrets the lack of areas where we can talk without hearing another group next door, and without everyone hearing us. Since the Laval Virtual World, the platform has improved audio isolation and in particular spatialized sound: when you move away from a group that is talking, you can no longer hear it.

The complex question of social interactions in virtual

This discussion about improvements continued during the panel, with Kent Bye, but also Asha Easton from Immerse UK, Liudmila Bredikhina from the University of Geneva and Lorelle Vanfossen from Educators in VR. Social interactions were the most frequently mentioned issue. According to Lorelle Vanfossen, “a virtual event is no different to scheduling in the real. You need to have space, to breathe between the events.” Meeting spaces are essential for an event, virtual or physical. Participants should be able to meet before and after the conferences, to exchange ideas. She went on to say that in the virtual world, it is important to schedule these moments of exchange, to encourage people to meet at a specific time and place.

Virtual worlds and events therefore have a definite future, but many elements still need to be improved to make the experience as beneficial as it is in physics. But these meetings were a real breath of fresh air to continue the exchange with the other members of the XR community, who intend to exploit every corner of the virtual world.

But then, what can we do to continue to exploit these virtual worlds while the return to reality is gradual? Valentin Régnier, Community Relations Manager at Laval Virtual, expressed this desire to provoke meetings, partnerships, collaborations, projects, both in real and virtual environments. Virtual worlds are starting to become an interesting tool to build business opportunities by connecting people and sharing tools. This is why the Laval Virtual World will become permanent for companies, artists, researchers, scientists and students who wish to continue to learn and exchange. The world will now be accessible through a membership, which will also provide access to virtual meeting rooms, exclusive VR/AR content and a large directory in the field of immersive technologies.

The surprises were numerous, as Laurent Chrétien announced in conclusion that a new virtual world was opening its doors: the Laval Virtual Congress Center. It will be the scene of a number of external virtual events over the next few months, so June and July are already full of bookings, says the CEO of Laval Virtual. At the same time, Laurent Chrétien announced the signing of a partnership with XR Latam to export the Laval Virtual concept to Latin America. See you in 2021 for the Colombian exhibition!

Finally, and to build on the success of Laval Virtual World, Benjamin de Wit of VR Days announced the virtualization of the event co-organized by Laval Virtual. “If people can’t come to VR Days, VR Days will come to the people. We have set ourselves the goal to host the most immersive event of 2020!” On the programme: a marathon of online conferences, a virtual exhibition space, an immersive investment market, the Church of VR creation space entirely in virtual reality. The goal is clear: “We’re going to bring XR to the masses!” An important challenge that virtualization can meet.

Worth reading...
Laval Virtual Days: the birth of virtual worlds