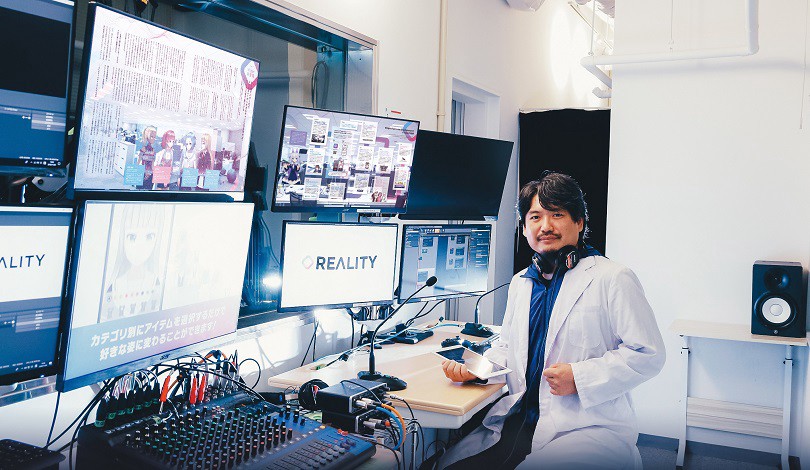 Akihiko Shirai has been appointed as the director of “GREE VR Studio Lab,” the research and development organization for cutting-edge technology, including VR. We spoke to him about the business and technology behind the VTuber, as he passionately states that “VTubers are respectable partners with personalities.”

Behind the word VTubers, we must understand virtual influencers, avatars equipped with artificial intelligence and capable of making videos like the YouTubers we know today. Akihiko Shirai is the director of GREE VR Studio Lab and a doctor at the Tokyo Institute of Technology. He has also been involved in research in France. In addition to being involved in industrial manufacturing as a Doctor of Engineering, he has been working on VR entertainment research and was thus appointed director of GREE in 2018.

Dr. Shirai has various “avatars” from his background in video and photography, show business activities, and being a father. He truly believes in the technological innovation that VTubers represent and their integration into contemporary society. He also works closely with Laval Virtual to showcase the most innovative projects from Japanese research in new technologies, including virtual reality.

You left your post as a university professor to join GREE.

I felt that it was rough to have to live my life being tied down to the title of a university professor. I wanted to do something new, even if it meant that I had to leave behind the life I knew, or in other words, my avatar at the time. I felt like I had to climb a mountain to go to a new world that has never been seen before, so that I can tell people about it. I had conversations with IT companies that are well-known around the world, but the passion that GREE showed toward the VTuber business was outstanding. For this reason, I thought that together with GREE, I could explore the world ahead for VTubers.

In Japan, there have been forms of entertainment in which people express themselves through dolls, such as Joruri, since early times. This is a form of culture and entertainment in which the puppet masters use avatars to explore the boundaries of the world and work together to reach the pinnacle of what people truly find interesting. In the modern day, this art form has turned into manga and anime, and now, the existence of VTubers has emerged. By attaching ideal personalities to ideal appearances, “thoughts” and “special talents” that need to be expressed are able to stand out and be transmitted.

“REALITY Avatar,” the app developed by GREE, enables various people to become “who they want to be” through just a smartphone. A wide variety of new people exist here, and users are able to establish “new identities for themselves” by understanding through experience how they can entertain their viewers. We continue to create the frameworks to make this happen, acquire patents, and provide technical support, but we feel that it is equally important to create “things that are not necessary at the moment.” Because you will need tools that are completely different from what is available now in order to climb the huge mountain in front of your eyes, it is also important to gain experience handling things that are not currently necessary.

What lies beyond that mountain?

I imagine that there is a world where VTubers surpass actual humankind. As an example, the technology behind VTubers is the “Formula One of live entertainment.” At the moment, we are a REALITY Studio, a team that supports the best technology and transmits the ideal existences known as VTubers. We must now showcase this technology and the excitement generated by the passion of the fans to the world.

In order to reach the world, we must develop a demonstration system that envisions understanding from the other side of language barriers and cultural differences and create scenarios that leave lasting impressions. Instead of “choosing not to climb the mountain because it is steep,” our role is to create a habit of “endlessly taking on challenges,” even if it is through baby steps, and to present the value that exists on the other side of the mountain so that everybody naturally knows which way to advance.

In the future, will we see a society where VTubers also gain citizenship?

Actually, I would like them to gain citizenship this year. I feel like we are at the last stretch before the existence of VTubers becomes more familiar, so that people across Japan think “VTubers will provide hospitality for the 2020 Tokyo Olympic Games.” It is a matter of time until avatars perform jobs in the place of humans, and the time will come when people feel like it is more important, valuable, and profitable to spend time as an avatar than in real life.

Now is the time when the real and virtual worlds are coming together. This will result in the creation of a new world that goes beyond the boundaries of the screen. For this reason, I think that it is wrong for young people to feel that they must live a life that has been chosen already. Because a future will come when avatars that you freely create will do your work for you, you yourself can live in a different way. I want people to think more flexibly about how they live and completely change the common practices of the world. I believe that GREE is a company that can create an environment that supports these types of innovation.