Judith Guez guides us through her virtual dreams in Rome 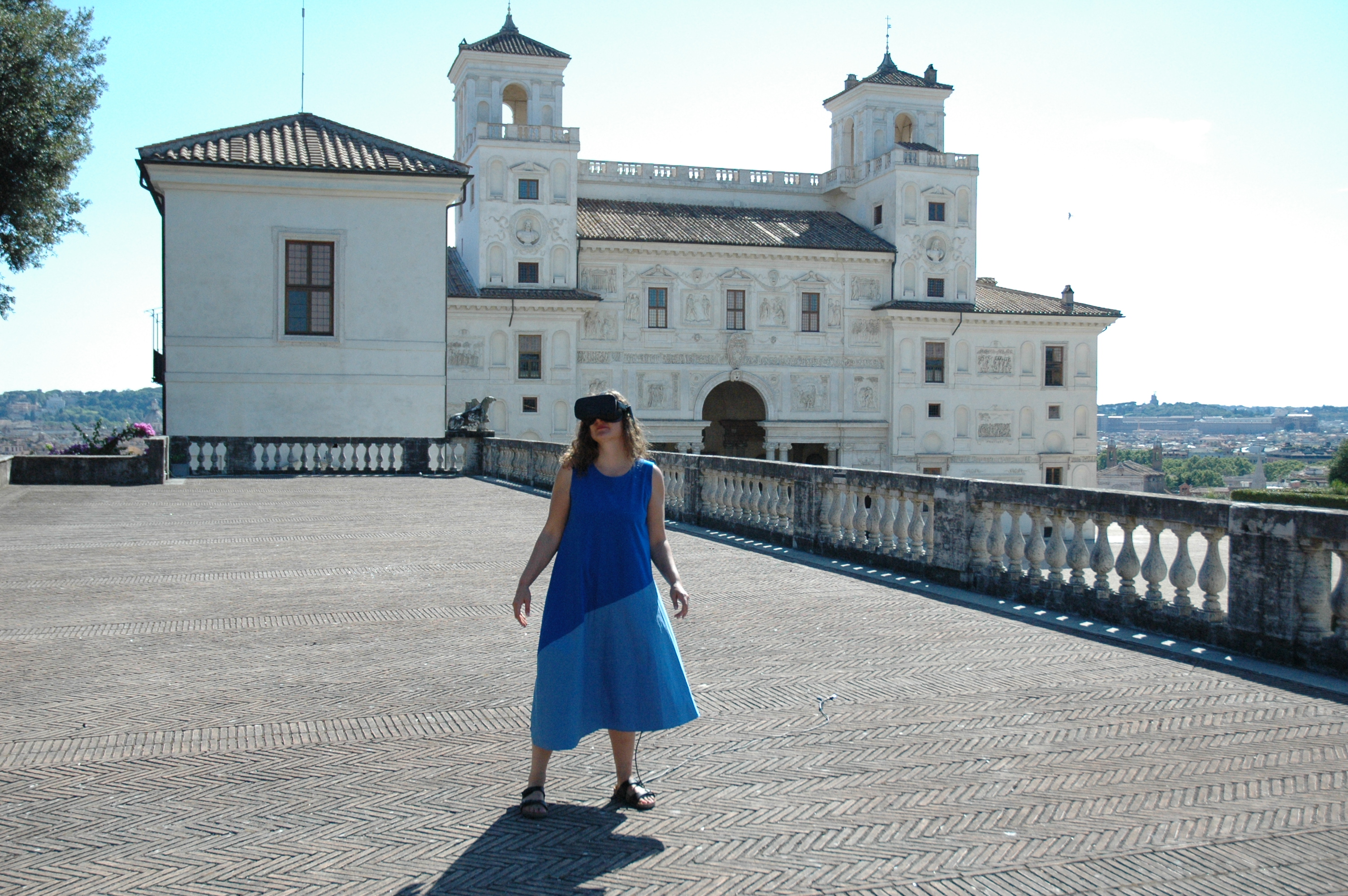 Director and curator of the art and virtual reality festival Recto VRso, Judith Guez is above all an artist-researcher. Always attentive to artistic movements, she also takes the time to create. During the month of July, she was the guest of the Villa Medicis, a prestigious artistic residency centre in Rome. She tells us about this trip after weeks of isolation and artistic residency.

What is the Villa Medicis? When you hear its name, you can’t help but think of a rich history.

It’s a place that has a very long history dating back to antiquity. It was the Medici during the Renaissance who took over this place and expanded it into a magnificent palace. For them, it was a home, but also a place for parties and receptions, for showing off. During Napoleon’s reign, the Villa was acquired in order to become the French Academy in Rome. It was a place where famous artists came, musicians, painters, architects, etc. Selected artists came there during 2 to 4 years. They were part of the famous Prix de Rome, which disappeared in 1968. So it’s quite a prestigious place that has changed a lot, with a lot of history. It’s a beautiful and inspiring place… When you walk around the Villa and its gardens, you can see frescoes and sculptures of the period (mainly copies, the originals being in Florence).

What about today? Is it still a place of reference in the artistic world?

Yes, it’s one of the most renowned places for artistic residencies. Today, it’s still the French Academy in Rome, and every year there’s a call for projects to select the winners. 15 laureates are chosen to come for one year. It’s a very sought-after place in the artistic world around the world. It is a very inspiring place to create and to give this time to artists who are often constrained by production. At the Villa Medici, they have no obligation and their project can change throughout the year. The place and Rome also influence the creations.  Apart from its competition, the Villa Medici is open to several programmes and partnerships, for example hosting shorter residencies. It is in this context that I went there for a month.

So how did you get the chance to come and create at the Villa?

It was the BNF, the French National Library, who called me last year. They were looking for a digital artist. For two years now, they’ve had a program to promote their archives by digital artists, which they select by their committee. Last year they chose an electronic music artist, and this year they chose me as the virtual reality artist of the year . The goal of the project is to use their archives to create a new virtual reality work. The BNF has a partnership with the Villa Medici and invited me for a month in Rome to work on this project and to be in residency.

Residency moments are very important for creation, as they allow time away from everyday life and the concretization of projects. I have already done several artistic residencies, for the writing, creation and production phase. At Laval Virtual with the Recto VRso festival (Judith Guez created the festival in 2018, ed.), we organise residencies for a week before the exhibition so that the artists can install their works in situ.This year, there are plans to launch cross-residencies with Stereolux (a theatre in Nantes, France ed.) to support this time of writing and experimentation in digital creation.

Speaking of Recto VRso, these residency times are also a way for you to concentrate more on creation and to leave your festival organizer’s hat behind?

Yes, it is. Every summer, I keep a month off just to have these moments of research and creation. I need these moments to create and continue to question the new artistic forms that interest me. This time can take several forms: either on collective projects, or alone as here with this residency at Villa Medicis. Being alone and having time is disturbing, especially after the effervescence of the year at the festival, but that’s where the essence of my creativity comes back.

With Recto VRso, there is of course just as much creative work, with the curation of the works and the creation of the scenography in particular. There is also a reflexion which is carried out at the artistic department and on several conferences and workshops, which I want to keep around subjects such as for example the exhibition of immersive and interactive works in real and virtual spaces, or the stakes of creation with its mediums. I was also able to present personal works for example with the support of the Laval theatre in 2019. But it’s different to be able to take time out of the Recto VRso calendar to refocus, to better understand what drives me. So it’s true that being a month at the Villa Medicis is a great opportunity. It is necessary to have these moments, for Recto VRso too. For me, I really need to touch the creation and experimentation of new digital media, in order to be closer to the artists and their works.

Are you the first to come to the Villa Medicis for a virtual reality project?

I don’t feel like there’s been a lot of project with virtual reality. But they’re open to all mediums, all disciplines. In the exhibition of this year’s residents (visual artists, writers, designers, architects and musicians, etc.), there is a bit of digital art.

What is this project that the BNF has given you and on which you are working at the Villa Medicis?

In the beginning my subject was the Wave, nature, the sea, something timeless. I wanted to search through all eras for representations of the sea, and more precisely of the Wave. In the archives of the BNF, you can find paintings, photographs, feelings through texts, sound recordings, and videos… Moreover, what is interesting about virtual reality is that it connects several mediums. It allows me to use old prints as well as sound. But when I arrived at the Villa Medicis, I changed and refined this subject.

The Villa and Rome really inspired me. Here there are many sculptures of Neptune and seahorses, especially the Trevi Fountain. And the idea of the Villa is to be a moment to create, it’s the “daydreaming” side, and we also dream in front of the sea. We’re in such a hurry, we don’t have time to just look at things. For me, virtual reality has always been a tool for creating experiences that allow us to give back the idea of wonder and dreaming, to be transported into worlds through contemplation and more slowness and presence to environments. So I deepened my subject by being at the Villa Medicis, which I called “Dreaming Across Time”.

What will this “daydream” look like in virtual reality?

I work a lot on the real and the virtual scenery, which are always very linked, and on the continuity of the mediums. For the restitution scheduled for December 8 at the BNF, I chose a beautiful wooded room because the old/new side also interests me, to show this continuity between the old and new mediums. My idea is to take a very old book from the Renaissance called “Le Songe de Poliphile” (Poliphile’s Dream), about a character who dreams and describes his magnificent journey. I would like to find this book at the BNF in the collection of old books and place it in real life on a display, and when you put on the virtual reality helmet, you will see exactly the same book, then the environment around it will change: it will be like in the library, when you read a book and leave in your imagination, your daydreams. And I’d like the elements of the BNF archives to be displayed as memories like you can have when you read a book.

It’s like being in the gardens of the Villa Medicis, where it’s a place to dream and create. And in the end, this daydreaming takes us to the seaside, then to abstract waves, and maybe even to Neptune’s seahorses. In this way, I transport the spectator little by little, in archives, memories and dreams. I have also made a series of photos around daydreams at the Villa, especially of me wearing a headset. This headset which is a portal also for the imagination and other worlds, as if I was facing the sea for example. And I also have a series of some videos of “captures of daydreams” in the gardens of the Villa Medici, and some 3D scans of sculptures. Moreover, we don’t know if we’ll be able to put on a headset in December, given the sanitary context… So I’m also thinking about making a special scenography.