The photogrammetric artistic universe of Commonolithic 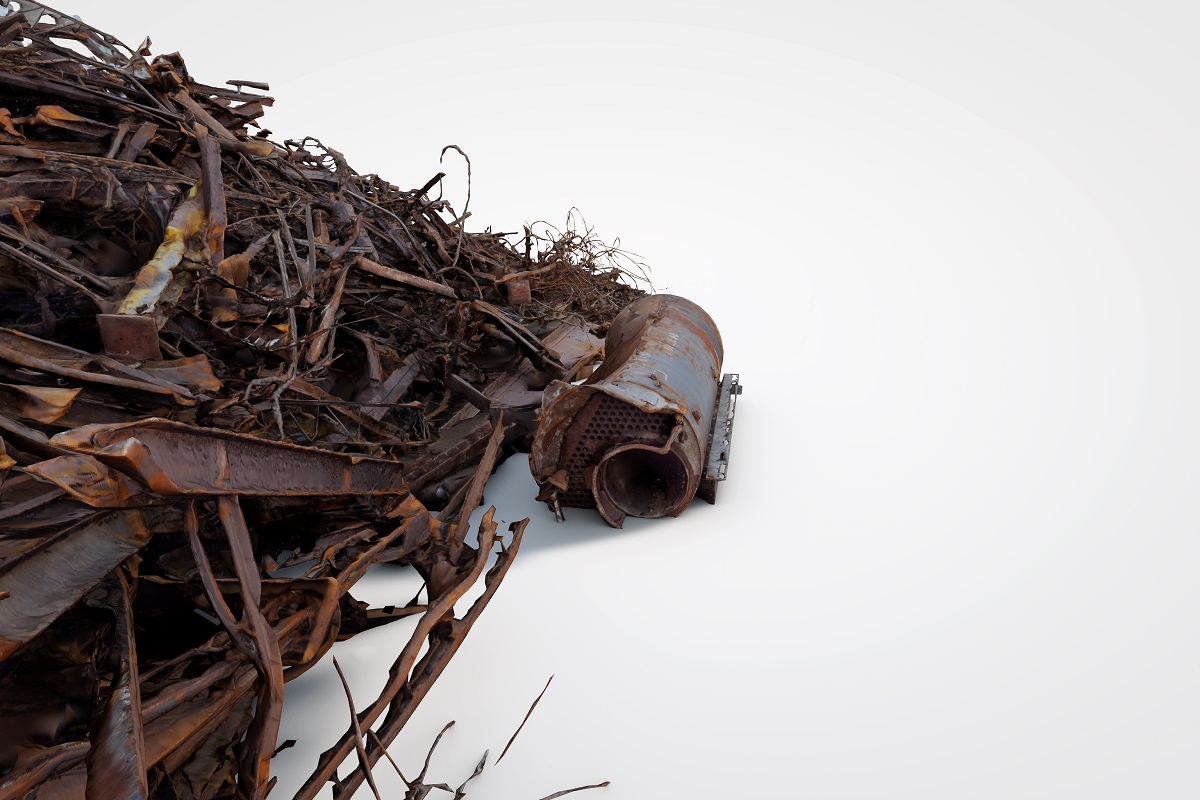 Tom Watson, known under his artist name Commonolithic, puts photogrammetry at the heart of his artistic practices. As part of the Recto VRso festival, he exhibited Iron Pile, an artwork showcasing a metal mass inside a virtual environment. We interviewed him, to know more about his creation process and how he used sound to improve the immersion in virtual reality.

Can you introduce yourself? What is your artistic background?

My artistic name is Commonolithic. I studied sculpture in the United Kingdom, then I continued in Canada. For me, the digital transition happened in 2015. I made the switch to digital because I was interested in working with multiples. So I started to teach myself photogrammetry. I made a work entitled ‘Crush and Burn’ comprising scanned  sculptures made from giant toy blocks called “Mega Bloks”. I wanted to make different forms with these blocks, but I had a limited amount. So scanning became a way of working with the same material over and over again. Since then, my practice is still based on exploring photogrammetry as an artistic medium. And Iron Pile is no exception. That’s the largest thing I’ve scanned, actually.

Why did you choose digital art? What is it about virtual reality technology that appealed to you?

With all the 3D scans I had, I wondered: how do I exhibit? I started up with large format digital print first. Then I spent a year on a research creation project developing outcomes using photogrammetry displayed in room scale VR. I’m interested in creating material and spatial experiences in VR. I liked the level of fidelity you could get in virtual reality. At the same time, it doesn’t have to be hyperrealistic all the time. It’s a way of spatialising my scans to experience them in three dimensions. As a sculptor, that was what was missing for me in the scanning process. I see WebVR as a social extension of the spatialising of scans. Now I am able to create group experiences, opening up another world of possibilities.

Can you present your work “Iron Pile” in a few words? What does it consist of?

Iron Pile is an immersive experience of a material presence in WebVR. The immersant is confronted with a large pile of twisted metal, a collection of materials from a previous life ; a material in the process of being reclaimed from demolished old factories. The pile was pretty big: 20 foot-high and 100 foot-wide. So I tried to live up to that in a virtual reality experience. You can walk through it and in it, and so have a different relationship to it.

The pile is not a shiny new thing, it has had a life and then it has been reduced to a raw material. As a sculptor, this is interesting to me. I think it’s difficult for some people to get around, because it looks like something that is broken and doesn’t function anymore, so there is no value. It brings us back to the material. The process of photogrammetry scanning is one of approximation. There is ambiguity in the end result. It goes as far as it can to recreate the physical existing thing.

Why did you opt for photogrammetry to create your artwork?

I’m interested in photogrammetry because it’s like a material process. You put these images in, you make a 3D model of the images, and it’s an approximation to the thing but it’s never exactly that. There is a level of interpretation by the software. I like this digital process which is similar to a material process. As a subject matter, the iron pile seems to fit with this process. There are other ways of modelling in 3D, but photogrammetry is completely different. There is a certain amount of acceptance you have to have as an artist, and going with what the process has produced in a digital sense. In terms of the immersion, I collaborated with a friend, FRKTL. She is incredible. She added sound elements which increased the sense of space and overall immersion. This was missing from what I’ve been doing so far.

Why did you choose to represent this pile of metals, which is not “artistic” nor “beautiful”, and in a very simple and empty environment like this one? We feel that there is a conceptual side behind all this.

As a sculptor, I think materiality is a large part of the art work. A lot of digital media, mainly image-based stuff, tries to overwhelm and saturate the viewer. I’m more focused on creating a spatialised environment to navigate, leaving room to explore. In Mozilla Hubs, there are things you can do to focus the attention on a few elements, like using fog to reduce the distance you see. Also, I think the pared back nature of the work allows the sound to fill the space. That’s why the soundscape is so important in this particular piece, not only for immersion. There is not an over abundance of visual stimulations – it’s the experience of a representation of a material. It plays with your perception and your expectations.

The work is visible in VR in particular, but we can also observe it on our computer. Does it lose its meaning outside of a VR headset and environment?

90% of people will not be able to experience the piece with a VR headset as we haven’t reached that stage yet. But they can experience it through a computer screen, which is fine. As we go into wider adoption of virtual reality, it will be more common for people to experience the work that way. But Mozilla Hubs is not just an exhibition space for artists. It is designed as a tool for meetings and as a social environment. I think it’s well placed to be this crossover platform that works with a screen and in VR. Of course, I would say the immersive experience is more deeply felt in VR. There is no separation between you and the screen. You can’t separate yourself from what you are looking at. The sense of time is also different. Time passes very slowly in VR. Five minutes feels like an hour. It’s a very different space to work with. I’m not sure how the experience on a screen is comparable to the VR. I just think it’s two different ways to experience the same space.

To make this work, you worked with another artist, FRKTL, to build a sound environment. What is the role of sound in your experience?

I pretty much asked FRKTL: “how would you relate to this environment with sounds?” She put together some recordings she had. She went through a process of first spatializing and flattening them. She first put the sound into stereo, then she went back into mono and placed them into the space. I didn’t give too much guidance to FRKTL. I wanted to see how she would respond. It’s a mixture of recordings, of sounds made by her, synthesized and granular elements, and melody. She managed to capture the atmospheric and spatial nature of the piece. The sound is 50% of the experience. I don’t think one is more dominant than the other, they both work well together.

How did the collaboration with FRKTL come about? Did you know each other before?

She was the first person I contacted during the first lockdown of the pandemic. I came across her work on Soundcloud. I put a playlist in the background while I was working, and I thought it would be perfect for my piece. I wasn’t sure that she would be receptive but my partner convinced me to email her. In fact, I contacted her for another piece, but it turned out that she made a new sound piece specifically for Iron Pile.

That was one of the positive points of the pandemic – if we can say it that way. Obviously, there has been a lot of tragedy and pain, but people have been more receptive to being contacted. Meeting and collaborating with people remotely has been amazing! Actually, I’ve never had a face-to-face conversation with FRKTL. We just discussed via emails, messages and as avatars.

Did you want to include sound in your artwork before meeting FKTRL?

At some point in my creation, I realised I was missing something. I was missing that level of immersion that you can get with sound. I was lucky enough to meet someone at the right moment. And FRKTL is incredible! She did a gig inside the videogame Minecraft for the CTM festival in Berlin. It was great to meet her and work with her.

Did the pandemic change the way you work as an artist?

Definitely. I focused on Mozilla Hubs because it’s open source, there is a strong community and you don’t have to download an app. I like its accessibility. It became part of my new practices. I use Hubs for sketching VR environments, having studio visits, collaborating with people in real time, having events and meeting people. I could do things like that in real life, but with a wider audience and larger potential people to work with. As a digital artist, it’s very important.

What’s the future of Iron Pile? Are there any other exhibitions planned?

I am currently exhibiting at CADAF, the digital art fair, with my partner Olivia McGilchrist [17-23 June, in Paris and online, ed]. But right now, Iron Pile is staying as a Hubs space. I have other works on the platform. I am doing an exhibition in Brazil with Museum without walls. It’s accessible online.