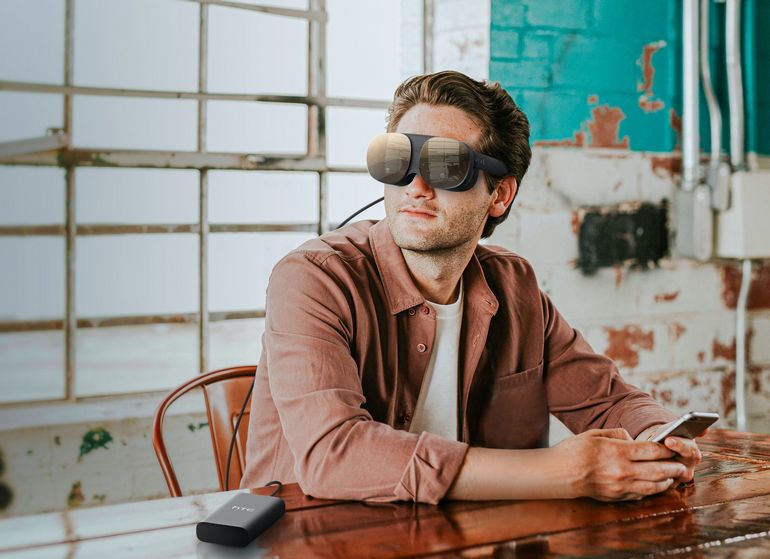 The VR headset Vive Flow is not for professionals.

HTC is releasing a new VR headset for the general public: the Vive Flow. Designed as glasses with an ultra compact shape, the Vive Flow will be mostly used to watch videos and live light immersive experiences. Will these “immersive glasses” by HTC open the virtual reality market to consumers?

A new door to a consumer-oriented virtual reality?

October is the VR hardware month! After the Lynx R-1, HTC announced the release of its virtual reality glasses for consumers. Since the launch of the Oculus Quest in 2019, the trend is to design VR headsets accessible to the general public. Standalone, cheaper, easy to use, VR headsets want to conquer the consumers sphere.

HTC designed its new VR headset with a compact design and an ultra light weight. We wear the Vive Flow like glasses, and its barely 200g weight allows it to be held simply by branches on our ears. We are a long way from the VR headset that we have to blindly adjust behind our head with a strap. At first glance, this headset will be used for simple virtual reality experiences (short games, watching videos…). The ambition of HTC is for the Vive Flow to be the reference VR headset for the general public.

A headset for everyone… or almost

On paper, the HTC Vive Flow headset has a 1,6K resolution screen for each eye, a 75Hz frame rate and a 100-degree field of view. The two cameras of the immersive glasses allow a 6DoF capture of the movements. These technical characteristics are obviously weaker than the professional headsets on the market, but they are sufficient for consumer use.

To make it even simpler to get started, HTC has removed the controllers from its new Vive Flow. To take control of the experiences, all you need is your smartphone. After syncing with the headset, the phone will be able to serve as a controller. In order to allow everyone to test the experience of Vive Flow, HTC has also thought about nearsighted people. The design and size of the headset do not allow to wear it over glasses. To overcome this problem, a correction of myopia is integrated into the lenses, ranging from 0 to -6 diopters.

Behind this potential, a few shadows darken the picture. First of all, only nearsighted people can benefit from this vision correction, not astigmatism or hypermetropia. On the other hand, concerning the synchronization with the phone, it only works with an Android smartphone. For the moment, it does not work with the iOS operating system. Finally, the price does not allow us to predict a massive adoption of the headset: the general public will have to pay 549€ to test VR. Despite this, HTC’s move shows the attraction of the biggest hardware suppliers for the democratization of immersive technologies.