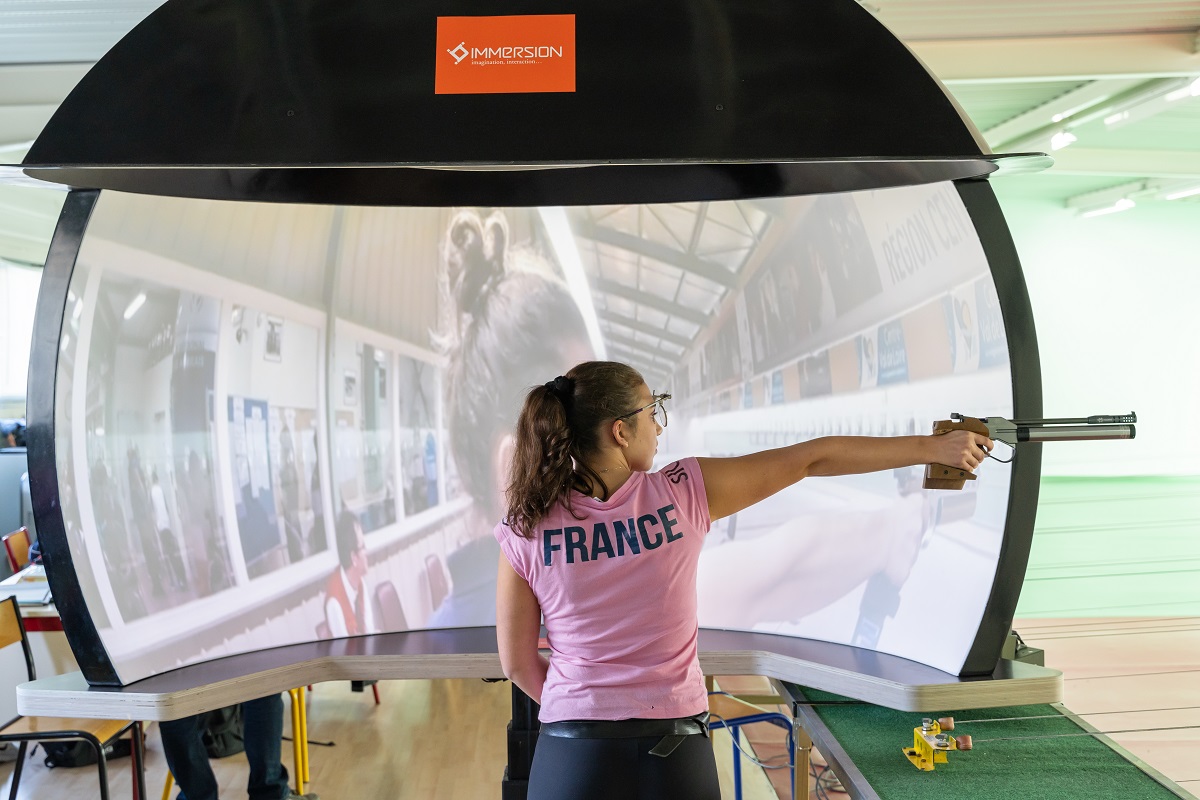 The project SportTrooper is an "augmented" sports training solution for stress management.

A group of virtual reality researchers and top athletes have initiated a project as the 2024 Olympic Games approach. Hélène Jacolin, former athlete in the French pistol shooting team, presents the project SportTrooper developed by CREPS Bordeaux, onepoint and Immersion.

France’s pistol team will make a big qualitative leap in their training routine for the 2024 Olympic Games with the integration of SportTrooper in a few months. This personalised training solution delivers an immersive experience in real competition conditions at the shooter’s own training facilities, helping them manage and reduce stress.

This system, developed by onepoint and CREPS Bordeaux in collaboration with Immersion, is a product of the SportTech initiative launched by the Nouvelle-Aquitaine region. SportTech aims to spark collaboration between local sports bodies and digital players in order to promote and support innovative digital projects with a positive impact on sports performance.

Stress as a negative factor in sports performance

That is what Hélène Jacolin, French pistol champion (winner of the 10-metre pistol shooting mixed event in 2020) and functional analyst for digital applications at onepoint, has observed over the years: “A pistol shooting event consists of a qualification round of 60 competition shots, then the shooters with the top eight scores move on to a final round. Score zones, environment, and shooting tempos are different between the two rounds, but only major competitions hold this final round. I participate in many events every year, but only a few will hold an 8-contestant final, and I need to qualify first! So, in the end, over 12 months, I participate in 2 finals out of 15 competitions on average. As I haven’t developed habituation (the process of becoming used to something), I always feel like it’s my first final: I’m overcome by my emotions, I lose my clarity, I panic, and I end up making mistakes. To make progress, I would need to practice in real final conditions regularly so that I can learn to stay in control.”

This observation is confirmed by Walter Lapeyre, coach of the French pistol team at CREPS Bordeaux, who often witnesses a significant decrease in the shooters’ performance during the last stages of a competition. While a certain level of stress can be beneficial, in this case it becomes a hurdle, a disruptor, to the extent that it is not uncommon for shooters to perform poorly in their first finals.

Lapeyre and Jacolin believe that the guiding principle of any shooter’s training should be “the match is the standard.” They think that training should take into account real competition constraints, such as shooting time, lighting conditions, authorised material, and background noise. Because, even though the athletes’ current mental preparation routine includes stress management sessions with a sport psychologist, they struggle to learn to “tame” a stress response that they hardly ever experience, as their training environment does not reproduce real competition conditions.

In the light of these challenges, onepoint, CREPS Bordeaux, the National Pistol Shooting Centre (located at CREPS’ facilities), and Immersion, decided to join forces and tackle the issue. SportTrooper was the outcome of their endeavours: a personalised training solution comprising a web application, an immersive device, and a stress measurement system. The athlete is immersed in a training session that simulates real competition conditions, allowing them to get to know themselves and manage their stress better.

Firstly, the shooter, who is on the shooting range with their pistol and facing a target, is wearing different types of body sensors to collect data such as:

Then, augmented training begins by launching SportTrooper. This application, developed by onepoint, facilitates the shooter’s total immersion in a competition environment owing to a system created by the firm Immersion, comprising:

The videos that the shooter sees are obtained through 360-degree video capture to visualise the competition venues and add the related sounds, enabling the shooter’s total immersion in the competition’s environment.

This technology allows the French pistol team to acquire new video footage autonomously using their own 360-degree camera whenever they visit new competition venues. Then they can use this footage to enrich their training sessions easily and quickly.

Julien Castet, Head of Research at Immersion, explains why they chose this solution:  “After a discussion with Walter Lapeyre and the project team, we defined an approach that took into account their needs regarding a lifelike experience and the preparation and modelling of simulation scenarios. That is why we quickly discarded virtual reality headsets and traditional immersive environments, which were either too intrusive or too far removed from real-life conditions. Instead, we leaned towards a hybrid device that would be perfectly suited to the training of high-level athletes, since they can use their own weapon.”

The collected physiological and psychological data are analysed in the SportTrooper application in order to find a correlation between the shooter’s physiological state and the quality of their shot. The coach and the sport psychologist will then compare the results of this analysis with those of a standard training session to determine the source of stress.

Armed with this knowledge, they will be able to propose individual and personalised training sessions by “inserting” different visual or sound elements at specific moments to increase or decrease the effects of stress on the athlete.

As it is based on personalised assessments, augmented training is also a useful tool to enhance mental preparation sessions, held regularly between training sessions. This will result in adjustments to breathing, relaxation, mental imagery, behavioural, and goal-setting techniques, which rely on well-known processes to optimise sports performance.

After several sessions, augmented training should help manage competition stress so as not to hinder performance, maybe even boosting it in the long term.

Demonstrating the benefits of the solution

Onepoint’s R&D team has been an integral part of the project from the very beginning, endeavouring to provide scientific evidence regarding the solution’s benefits and value, and to advance scientific research in this field. The team works on cognitive aspects related to wellbeing and stress management, and they have developed a scientific methodology to validate the solution:

As of today, there is barely any literature concerning the use of immersive training to improve stress management for high-level pistol athletes. Only the INRIA Rennes has conducted a study involving a pistol shooting team from CREPS Nantes. However, they relied on virtual reality training to introduce stress factors, while with SportTrooper shooters use their habitual equipment and shooting range.

According to Alexandra Delmas, a researcher in cognitive science and onepoint associate: “We anticipate that SportTrooper will improve the shooters’ monitoring between training sessions by virtue of the input received from both the coach and the sport psychologist. The goal is to make the athletes feel better supported and help them manage their stress in competition to achieve peak performance.”

This institution provides support to top athletes from sports organisations that are established in its facilities following an agreement with their federations. That is why CREPS Bordeaux has taken up this ambitious project, managed jointly with onepoint, to optimise high-level performances and improve Olympic medal chances for France’s Shooting Hub and the Women’s Pistol team. The best pistol athletes train in this Hub, which has won several world titles and Olympic medals over the last 20 years.

As a transformation architect for corporations and government agencies, onepoint put all its scientific and technical expertise at the service of the project.

Scientific expertise falls within the scope of the R&D department, which currently employs 15 multidisciplinary profiles (PhD holders, PhD students, research engineers, and research interns and trainees). The R&D team deals with topics concerning the individual’s wellbeing in digital work environments: impact of technology on the quality of work life, design of a decision-making support assistant, impact of cognitive aspects such as stress management and motivation on business teams, etc.

The firm’s technical expertise is behind the development of SportTrooper’s digital application, which acts as an interface between the physical device, the collected data, and the training monitoring application.

Onepoint’s multi-skilled team combines the expertise of a doctor in cognitive science and ergonomy with that of a pistol shooting champion, allowing them to contribute essential knowledge to the psychology of pistol shooting sports.

Founded in 1994, Immersion is a European expert in virtual and augmented reality as well as collaborative solutions in the fields of industry and research. Its ambition? Turning industrial projects into human and technological success stories. Immersion’s multidisciplinary team brought their experience to bear on the SportTrooper project, imagining and designing the immersive solution. Their human factor experts met with athletes and coaches to analyse their needs as well as usage aspects to develop an operational solution adapted to their training programmes.

SportTrooper is a trailblazing project in the field of sports shooting: it is the first time that immersive technology has been applied to help pistol shooters manage their stress. It is a promising solution, as it certainly enriches the shooters’ experience. Next landmark: the Paris 2024 Olympic Games, to analyse the first results and assess the impact on the medal count.

Co-authors of the article:

Alexandra Delmas
Alexandra has a PhD in Cognitive Science and has been working as an R&D consultant at onepoint since 2018. Her research work on wellbeing at the workplace (stress management, mental load, etc.) and her expertise in gamification, UX design, and serious games led to her appointment as scientific advisor of the SportTrooper project. Applying a user-centric approach to validate the solution’s design, she focuses particularly on the effects of stress to improve the athletes’ mental preparation.

Cyril Faucher
Cyril Faucher is a former top epee fencer and assistant to the coach of the French Women’s Epee Team between 2005 and 2009. He has been supervising the top performance support programme run by the CREPS Bordeaux’s elite sports division since 2015, providing support to the performance optimisation projects launched by the different sports hubs.
As a co-supervisor of the SportTrooper project, he ensures the project’s successful implementation as well as its relevance for the athletes of the French Shooting Hub and the national coach, Walter Lapeyre.

Julien Castet
Julien Castet completed his PhD in Cognitive Engineering in 2010 at Grenoble INP, where he contributed to designing and developing a device for haptic interaction having variable degrees of freedom. He then completed several post-doctoral fellowships at McGill University and UCLouvain, among others, where he tackled multidisciplinary research work. Julien joined Immersion in 2012 as Head of Research, where he works to transform his know-how into industrial applications. 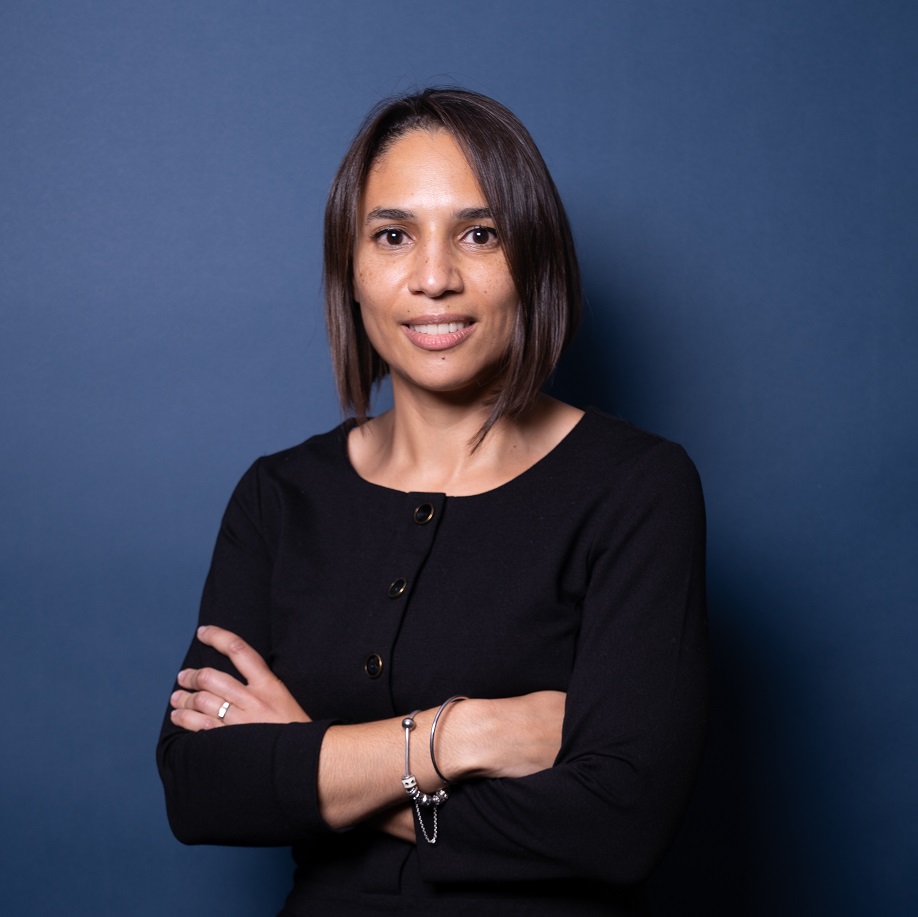 Former athlete in the French pistol shooting team, Hélène joined onepoint in 2013 as a functional analyst for digital applications. Her experience as an elite shooter (she won the 10-metre pistol shooting mixed event in the 2020 French Championship) means that she perfectly grasps what is at stake in the SportTrooper project. She has applied her knowledge to designing a digital tool that meets the shooters’ and coaches’ needs and expectations.

Worth reading...
“Immersive technologies are part of the future of sport”