One week of art residency at the Laval Virtual Center 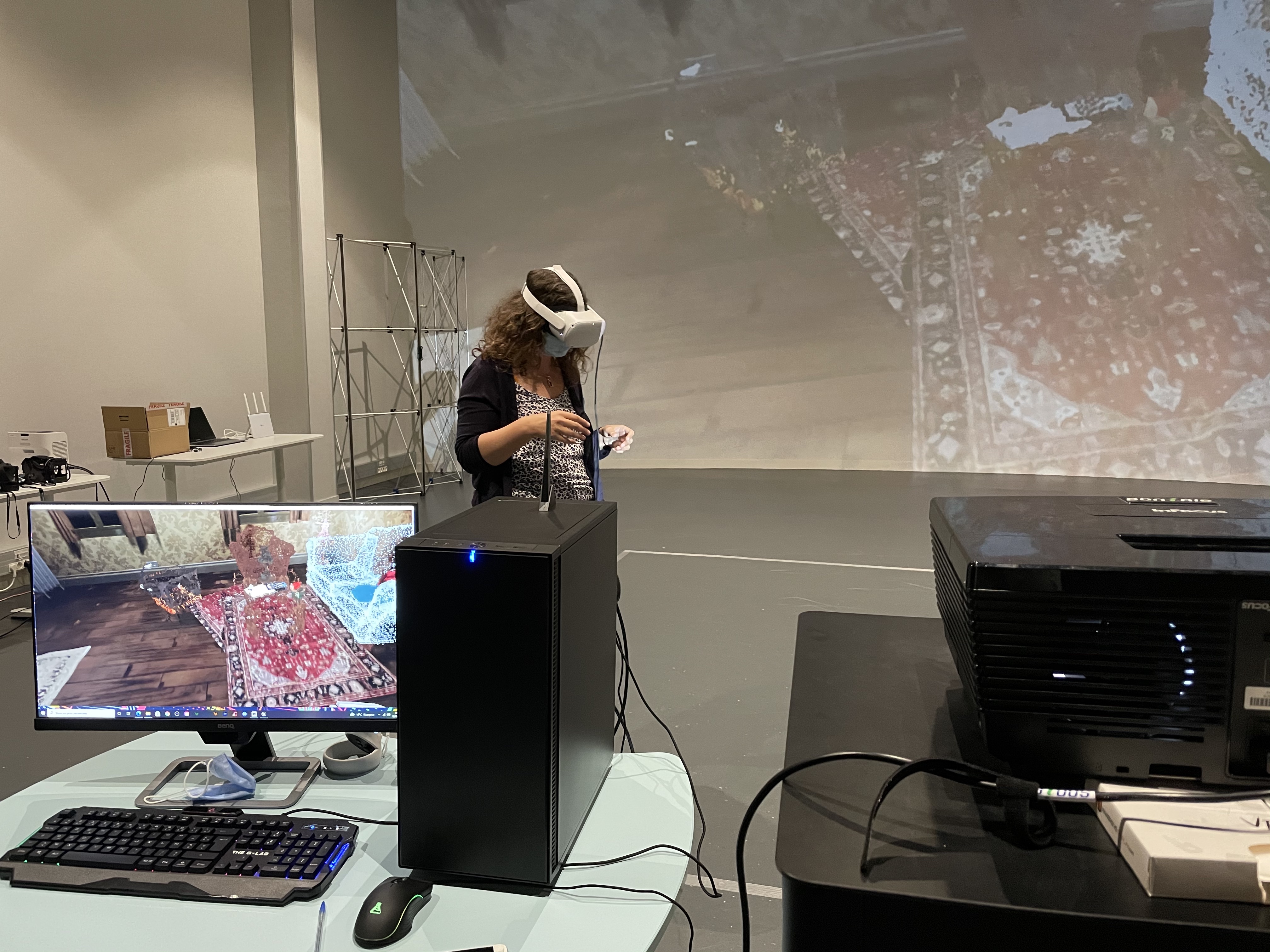 Katia Morel and Léa Dedola spent a week at the Laval Virtual Center for an art residency.

From June 14 to 18, 2021, two digital artists were invited to the Laval Virtual Center as part of the cross-residency between Recto VRso and Stereolux. These 5 days aimed to meet experts in virtual reality, and to initiate a digital art project. Back on this week of reflection and creation.

It is in the modern buildings of the Laval Virtual Center, at the heart of the virtual reality capital, that Katia Morel and Léa Dedola had gone to earth during one week. Reflection, creation and inspiration were the key words of this 5-day artistic adventure. At the end of the journey, they came up with a first draft of their artistic project, When the heart tightens, but also a lot of precious encounters and exchanges.

This cross-residency was initiated by Recto VRso, a digital art festival in Laval, and Stereolux, a space for musical and digital creations in Nantes, France. The two entities launched together for the first time this artistic residency, on the theme “Virtual Environment”. In the art world, a residency is a moment to incite creation. Artists use these moments out of the daily routine for the conception, preparation and production of their project.

The two winners, Katia Morel and Léa Dedola, form the TILT collective. Thanks to this residency, they benefited from three weeks of research and creation: two at Stereolux and one at the Laval Virtual Center. The establishment makes the link between technology and art, two fields at the heart of the theme. It was also an opportunity for the two artists to meet experts in virtual reality and to test immersive technologies.

When the heart tightens: genesis of an artistic project

For this artistic residency, Katia Morel and Léa Dedola proposed their project When the heart tightens. The two creators met while working in the same company producing VR experiences and video games. Katia has more of a graphic design background and experience in the production of 3D environments. Léa, on the other hand, is preparing a PhD in art on the subject of immersion and emotional interaction in virtual reality. “We wanted to put my research to good use in this art project. The residency is perfect for this kind of exploration,” explains Léa.

Katia and Léa’s project focuses on the relationship between the human and the virtual environment. Technologies such as the VR headset and ECG (neural and respiratory sensors) are at the heart of the experience, allowing for emotional feedback. “We want to create an emotional journey with an immersive, interactive and evolving storytelling,” says Katia. “Initially, our main theme was the feeling of love and motherhood. Instead, we chose to focus on the emotion of nostalgia.”

The connection between emotion and environment is essential in Katia and Léa’s project. They want to generate biomes with different colors and soundscapes, and which are able to trigger emotional variations. “For example, the heartbeat of the user can change the environment around him.” In the end, several emotions will mix, and each person will live and create their own immersive experience.

During their week-long artistic residency at the Laval Virtual Center, Katia and Léa were able to be in direct contact with specialists in immersive technologies. Upon their arrival on Monday, June 14, the two artists first took an in-depth tour of the Arts et Métiers facilities. They met the VR engineers, visited the research and experimentation laboratory, and discovered the immersive projects conducted by ENSAM. Then, throughout the week, they had the opportunity to exchange with them on technological improvements of their experience.

“During our week at Stereolux, we prepared our set-up so that we could use it on VR equipment“, explains Katia. The two artists made a storyboard of their experience. “Our idea is to generate empathy in the user. He will wake up in a ruined living room, and he has to understand what happened there. Several scenes appear as he goes along to help him reconstruct the story. The narrative thread is also recreated with objects and a voice-over.” The emotional dimension that the two artists are looking for above all else is essentially through storytelling. Katia and Léa worked on the timing of the story at the Laval Virtual Center, an essential element for the good sensation of their experience.

A positive result for the artists and encouraging for Recto VRso

At the end of this week of research-creation, the conclusion of Katia and Léa was rather positive. “We spent a very pleasant week, especially on a social level. The residence did not turn only around the project, there were moments of gathering which are also important“. In particular, the two artists received expert artistic advice from Judith Guez, creator and curator of the digital art festival Recto VRso, and Elhem Younes, a digital artist. “Judith helped us determine the future scenography of our project,” they said. Elhem, meanwhile, led an explanatory interview with the two artists, going back to the genesis of the project, and identifying what worked and what didn’t. “It was a powerful moment for both of us, which even triggered dreams!“.

At the Laval Virtual Center, they were also able to take advantage of the presence of the Laval Virtual, Clarté and Arts et Métiers teams. “People passed by our room, and the most curious stopped and asked questions,” they said. The residency week ended with a phase of testing and experimentation. Several people immersed themselves in Lea and Katia’s artistic universe, including Judith Guez: “we are delighted to have been able to welcome two artists and to have participated in the construction of this beautiful artistic project.”

The next step is the physical exhibition of Recto VRso from July 7 to 11 at the Musée-École de la Perrine in Laval. “At the end of the residency, we are one third of the way through the project. It’s going to go three times as far!” they enthused. Visitors to Recto VRso will be able to discover a first version of When the heart tightens project during the 4th edition of the festival.

Worth reading...
Léa Dedola & Katia Morel, laureates of the cross-residency by Stereolux